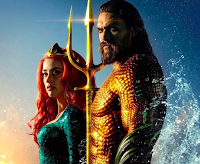 When a movie is projected to earn over a billions dollars worldwide, your expectations tend to be high, and we couldn’t wait to see this movie. Previews were enticingly played for months ahead of release, promising a winner for DC films at a time when Marvel is cranking out mega-successes faster than can be consumed by mere mortals. And a winner it is, as decided by votes cast in currency.
But mere mortals we are. We cannot breathe under water, deflect bullets or battle sea creatures as can Aquaman. Neither can we constantly crack jokes that hit their target. But wait, neither can Aquaman. His best lines were used in the trailer. Many others fall flat.
This was a long movie. There is an entire subplot with a character known as the Black Manta that begins early in the film and evolves into a ridiculous and unnecessary diversion from whatever story you choose to follow. I suspect that DC is trying to launch a universe of future hits from a cobbled together amalgam of origin stories that each might not make it solo.
And that story you choose to follow may be a bizarre version of The Little Mermaid or Pirates of the Caribbean or something else that’s entirely lost in a swirl of underwater fire and uber-technology. Yes, there are laser weapons being used by robo-suited warriors of the deep. While visually spectacular, the special effects department seemed to have trouble with underwater hair. But in their defense, at times it’s not certain if characters are flying through the air, or swimming in the sea. Or both.
A lot of explaining goes on in Aquaman. Why is it that he can breathe under water? How does an underwater laser cannon work? If you’re wondering, they explain it during awkward and distracting scenes that lengthen the movie further. And locations? There are so many of them flip-flopping through time and across the globe that titles are necessary. “Somewhere in the Sahara Desert.” Ok, thanks. What is Aquaman doing there?
I imagine that a lot of budget was set aside to youthenize (bad choice of word), or de-age, Nicole Kidman and Willem Dafoe. The result is always a bit creepy, as was the case in Guardians of the Galaxy 2, when Kurt Russell was magically transformed into a 20-something version of his former self. This was also applied to Michael Douglas in Antman with similar “what the heck?” disturbing results.
There is no chemistry, either water soluble or airborne, between Aquaman and his very red-haired mer-girl Mera. They exchange one unconvincing kiss. No submersible MeToo moments here. That chemistry is reserved for the relationship between the characters and the audience. Thus, the sideward stance of Jason Momoa, hair flowing, golden eyes sparkling as he glances seductively over his shoulder at the camera. He does this frequently. But boy, is he hot.
And Mera, all green/blue spandex and scales, has freakishly red hair that really does make her mother, the Little Mermaid, seem like a people-pleasing wimp. She clearly thinks Aquaman is a dope, but after some decidedly good ass kicking and rescues, she grows fond of the big guy. And boy, is she hot.
Just look at this list of characters I copied from an entirely public domain search of the Internet: Orm / Ocean Master, Queen Atlanna, King Orvax, King Atlan, Nuidis Vulko, Murk, Atlantean Soldiers, Mera, King Nereus, The Fishermen, King Ricou, The Fisherman Princess, The Brine, The Brine King, The Trench, Tylosaurus, Karathen.
I get tired just reading that list. A bit of study before the film will serve you well.
Just tell me one thing. In the five kingdoms of the sea, in particular, the Brine Kingdom, does Sebastian the Crab have a role, or are jumbo shrimp just oxymorons that suffer from low self-esteem and anger issues? They are quite uncooperative.
So, I’ve been very hard on this movie. I am clearly wrong if box office receipts are a measure of a good film. Aquaman was entertaining for a while. But if it were up to me, I’d deep six this to Davy Jones locker. Not the sailor. The ex-Monkee. The show I saw him put on before his untimely death was much more entertaining. And as Marsha Brady knows, his eyes sparkled too.