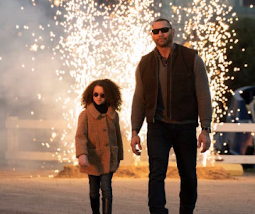 Currently streaming free for Amazon Prime members, My Spy seems like a Disney movie for adults. Dave Bautista, a professional wrestler who has made a smooth transition into the world of movies, much like Dewayne "The Rock" Johnson, appears here as JJ, a CIA operative who struggles to keep things under control. On a recent assignment he blows his cover and proceeds to kill everyone the agency was hoping to track more subtly and strategically. The killing is all accomplished bloodlessly and in pseudo comic book fashion.

As a last chance he is assigned to a surveillance project along with computer analyst partner Bobbi (“you’re not my partner”) played by Kristen Schaal. We know Schaal as a commentator on The Daily Show and as Carol, alongside Will Forte on Fox’s The Last Man on Earth. Here she provides lots of comic relief and is clearly the more capable of the two member team.

Bautista is no stranger to humor, also like Dewayne Johnson. In 2019’s hilarious Stuber he plays Vic Manning, another tough guy paired with the hapless Kumail Nanjiani. That film is reviewed here. And although Bautista is taking a turn as Producer on My Spy, his role as Drax in Guardian’s of the Galaxy, a Disney property, reinforces the notion that this film feels a bit Disney-ish.

The funny tough guy with a heart has worked as far back as 1988, when Arnold Schwarzenegger teamed with Danny DeVito in Twins. I guess people want to believe that there’s warmth and humanity under all those bulging muscles. Whatever the reason, it works, and continues to do so in My Spy.

JJ is very quickly paired with nine-year old Sophie (Chloe Coleman), the manipulative daughter of the woman the team is surveilling. From there the film becomes a heartwarming romp through the streets of Chicago, culminating at a non-existent airport in Naperville. How do we know this? The runway at the fictional airport ends at the edge of a cliff. It provides some exciting action reminiscent of Raiders of the Lost Ark, a fact mentioned within the film just as you’re thinking the scene is familiar.

For free and fun entertainment that doesn’t take up a lot of your time, My Spy does the job. Lower your expectations just a bit and allow yourself to enjoy a few good laughs. Overlook some of the acting and much of the script. It still works.