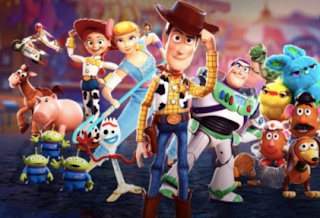 It’s hard to believe that Andy headed off to college in Toy Story 3 nine years ago. By now he might have completed his Doctorate. Harder yet is realizing that the Toy Story franchise has been with us for twenty-four years. Many of us have children who grew up with this cast of characters, headed off to college, and perhaps had children with their own favorite toys.
If you’ve been to Orlando’s Disney World since June of 2018, you’ve most likely been caught up in the maddening crush known as Toy Story Land. Created to the usual irresistibly colorful and immersive standards we’ve come to expect, you’ll want to ride the Slinky-Dog Coaster, pose alongside Buzz Lightyear with the kids and then run screaming in another direction after the giant Tinker-Toys and crowds of families with kids become too much.
But at the movies it’s like a trip back in time. After all, while we’ve been relentlessly aging, our extended family of characters have remained frozen in 1995, when the original Toy Story announced that “You've Got a Friend in Me.” One wonders why the theme park took so long to come to fruition. The second movie came out within four years. The third after a much longer pause of eleven. And finally, nine years evaporated prior to this most recent incarnation. It’s not like they had to create new characters or new voices (still Tom Hanks and Tim Allen).
But, forgive me for getting a bit misty during these films, and I know I’m not alone. Revisiting these old friends reminds us of, well, a lot. What a different world we lived in during the first two chapters. Perhaps a delay was in order post-911 as we adjusted to a daily diet of war and apprehension. Or did we need Toy Story even more because of it?
If you’ve seen one movie, you’ve seen them all. The original look and feel has been preserved by Pixar despite astounding advances in photorealistic 3D technique. That’s comforting, but just how long can they carry on this franchise? Perhaps as long as new kids are born to watch them? It’s refreshing to see a G-rated movie, an increasing rarity in our NC17 world. And it’s nice to hear fun new music in Randy Newman’s increasingly gravely voice.
Little Bo Peep has a larger role in this Toy Story. And a new character named Duke Caboom (voiced by Keanu Reeves) is a fun addition. He’s like an Evel Knievel partner to Buzz Lightyear’s ongoing failed attempts at flight and fantasy. The new comic star of the show is “Forky” – a living spork created by young Bonnie at her Kindergarten orientation. A subplot involving ventriloquist dummies has parents squirming, but maybe not the kids. That particular fear is an acquired taste, much like clowns. Woody is aging nicely but having something of an identity crisis. And his time in the back of a closet has resulted in “your first dust bunny.” It’s a testament to his own passage of time as adroitly commented upon by a toy alarm clock.
And speaking of parents, this story has a diverse and more present adult couple. “Dad” is referenced several times by the toys, and again by Mom, who ushers Bonnie away before, “Dad is going to use some words” regarding a flat tire on their RV. Animation within a long carnival segment is as good as any filmed amusement park. The lighting is brilliant, the colors vivid and the games come to life in an amusing way.
I’m leaving out details to avoid spoilers, but the setup for a fifth film is definitely in place should they choose to keep this particular money making machine running for another decade or so. It seems everyone wants to be part of this animated treasure. Voices include Mel Brooks, Carol Burnett, Carl Reiner, Betty White and even the late Don Rickles retrieved from archival audio. There are so many characters it’s hard to sort them all out. But with animated stars like these, it’s easy to see how they might go…to infinity and beyond.
Toy Story 4 (2019) runs 1 hour 40 minutes and is rated G.
Should I see this movie?