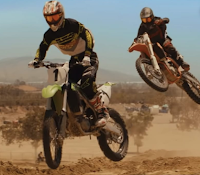 We are clearly scraping the bottom of the available movie barrel thanks to our Regal Unlimited Movie Pass. This is not a film we ever would have paid to see, nor is it one that I’ll recommend. Not being awful is not the same as being good.
You know you’re on the margins of the film industry when Trace Adkins has the longest acting portfolio among the cast members. Here he plays a tough guy (of course) farmer named Cal Bennett, father of the main character Marshall. He has a ponytail and a failing farm. He needs money to keep things going.
Marshall Bennett (Michael Roark) is a motorcycle commando, blown up in the Mideast and recovering from leg injuries that threaten to end his Motocross career. His wife Sophie (Allison Paige) is going to make sure of that. After all, she almost lost him once and they have a new baby.
A series of scenes show friends and family hovering over Marshall out of concern for his recovery, but effectively preventing him from reclaiming his dignity. And then he tries to change a light bulb by standing on an unstable stool. I’m not kidding. He falls and cries in his Dad’s arms.
At long last, Marshall defies Sophie by winning a local race and saving Dad’s farm with the prize money. Dad has a heart to heart with Sophie that turns things around. We suddenly find ourselves watching a Rocky-like against-all-odds training sequence to get Marshall ready to compete and go pro. Chin-ups in the barn sort of stuff with a little wifey exercise afterwards. This is the point at which I leaned over to my wife and whispered in my best Burgess Meredith impression, “Women weaken legs, Rock!”
Go Pro is a key choice of words above. This movie felt as if some Motocross fans got together with a helmet-mounted camera and decided to edit it into a story. I can just hear it, “Dude, we got Trace Adkins and Tony Panterra to sign on!”
Yes, Tony Panterra, is apparently sort of playing himself. He is a Motocross racer, stuntman and actor whose largest claim to fame is his daughter Lexy Panterra. I’d never heard of either of them, but it appears she has a large following for shaking her booty in a video workout program called The Twerkout. You can’t make this stuff up.
The Director and most of the actors have only TV and short film credits prior to this picture. The story is corny and predictable, but otherwise gets the job done and generates a little excitement. At least it’s short, and to their credit they managed to keep the rating down with an almost total lack of profanity. I doubt this will be in theaters for long, so if you like Motocross, you may want to zoom over to the theater soon.