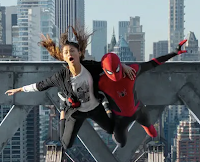 Spider-man fans can’t get enough of their high-flying hero. And the Marvel Universe is taking full advantage of that addiction. This latest film features Tom Holland, considered to be the best Spider-man alongside real-life girlfriend Zendaya (Zendaya Maree Stoermer Coleman) as the latest “M.J.” in the franchise.

There’s really no way to discuss this movie without spoiling certain elements, so be warned.

At times the presence of Doctor Strange threatened to overshadow the main character in Spider-man: No Way Home. I feel that Benedict Cumberbatch is too powerful an actor to portray this character, but that train has left the station. That Strange acquired his skills after spending time studying mystic arts in Tibet, casting spells and opening portals with flaming hand motions lacks the fictional credibility of genuine super powers.

Other favorites from the Spidey franchise return, most notably Otto Octavius, Doctor Octopus. A rupture in the multiverse allows a multitude of past villains to join the cast. Willem Dafoe is welcome in any capacity, but please tell me why two previous Spider-men show up as the actors who played them, Tobey McGuire and Andrew Garfield. We all know that’s not how the Multiverse works, right? But it did allow for some inter-character banter that was amusing for a while. “You mean your web comes out of your wrists?” the other two Peters ask McGuire.

The gag got a bit old, but is fun for fans.

So, chaos ensues, battles rage, M.J. is saved by a team effort of heroes, and ultimately Peter Parker must make the decision to be completely forgotten by everyone who has ever known him in order to heal the crack in the Multiverse with Doctor Strange’s help.

Two hours would have sufficed, but once again, this is a movie for the fans. And as usual, closing credits entice us with a future crossover between the Venom series and this one.

Great action and effects, but I’m just tired of this arm of Marvel.