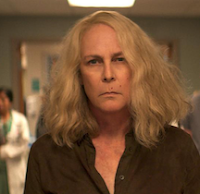 Spoiler alert, in case you don’t know what to expect from this movie. After all, we’ve been on this bloody journey since Michael Myers first started butchering people in 1978. That year a cute new star by the name of Jamie Lee Curtis became famous overnight as Laurie Strode and has been battling the same monster for 43 years. Now it’s difficult to tell whose face is more frightening, the much older Curtis or the William Shatner mask worn by Myers. 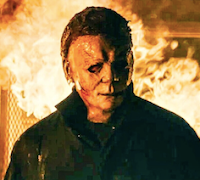 The Jamie of 2021 reprises her 2018 role as grandmother to Allyson, played by Andi Matichak and is clearly having a bad hair day. It is noteworthy that Matichak wasn’t born yet when this film franchise established the Slasher genre and spawned eleven sequels. The last film left Michael trapped in the basement of Laurie's burning house while she is rushed to the hospital with a terrible knife wound to the stomach. End of story, right? Not a chance. John Carpenter and Curtis teamed up as producers on yet another story, one that apparently never ends. In Laurie Strode’s final soliloquy, she paints a future in which there will always be a Michael Myers, a monstrous metaphor for fear and evil:

“I always thought Michael Myers was flesh and blood, just like you and me, but a mortal man could not have survived what he's lived through. The more he kills, the more he transcends into something else impossible to defeat. Fear. People are afraid. That is the true curse of Michael.

It is the essence of evil. The anchor that divides us. It is the terror that grows stronger when we try to hide. If they don't stop him tonight, maybe we'll find him tomorrow. Or next Halloween, when the sun sets and someone is alone. You can't close your eyes and pretend he isn't there. Because he is.”

Several of the original stars are back in this film. Nancy Stephens as Marion, Kyle Richards as Lindsey and Charles Cyphers as Leigh Brackett. Also in a lead role is Anthony Michael Hall, member of the John Hughes 1980's Brat Pack. His film career in Sixteen Candles, The Breakfast Club, National Lampoon’s Vacation and Weird Science eventually led to multiple appearances on Warehouse 13 and The Goldbergs. This, as he aged and became only vaguely recognizable as himself. Here, he plays Tommy Doyle, the baseball bat leader of a pitchfork-and-torch wielding vigilante mob that goes completely out of control in fictional Haddonfield, Illinois. The line “Evil dies tonight,” is chanted repeatedly, a hospital is overtaken by pursuers of Michael Myers, and Laurie Strode rips out her IVs and injects herself with a giant dose of painkiller from a carelessly discarded syringe and vial. She has just come out of surgery to repair her gaping knife wound, and if this film wasn’t a B-movie parody up until this point, it quickly becomes one.

Along the way, a gay couple who call each other “Big John” and “Little John” terrify trick-or-treaters on the porch of Michael’s childhood home. The entire town is aware of this house’s history, so living there is really an issue of poor judgment. Michael is leaving a bloody trail of bodies on a path leading directly back to this house, and the “Johns” are appropriately and horribly dispatched. The hapless town sheriff loses control, sits in stunned silence, and some confusing flashbacks reveal that Michael massacred the entire fire department the night he was left to burn in a basement.

Halloween Kills is an extremely gory, gratuitously violent outing. In other words, exactly what we’ve come to expect. If you find this appealing, this film’s for you. 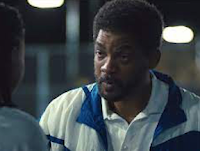