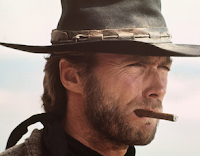 Last night we saw Clint Eastwood’s final film. Again. I guess if you’re a lifelong Eastwood fan, you’re so enamored of him that you’re willing to overlook much to share a fictional adventure with your favorite guy. I get it. I’d follow 90-year-old William Shatner anywhere in the universe, and some think that’s pretty sad. But if there’s one takeaway from Cry Macho, it’s the wise soliloquy Eastwood delivers to his traveling companion about the pointless nature of being “macho.” This, from one of the most macho guys ever to “make his day” on the silver screen. Cry Macho is not a coming-of-age film, it’s a clash of ages, within the leading man and between costars. Where do you go to see what your future holds?

So, let’s save both of us some time and click here to read my review of 2018’s The Mule. Not much has changed, except Clint’s age. He is now 91, but to his credit, he’s still producing and directing feature films. This is another script written by Nick Schenk, based on a 1975 novel by Richard Nash. Schenk authored The Mule as well, proving that sometimes success is comprised of who you know, not what you know, since he clearly can’t write.

Clint is a legendary rodeo star, derailed in his career by a broken back in 1979. His friend and rodeo manager Howard Polk (Dwight Yoakum) props him up through his years of subsequent struggles, until the time comes to call in a favor. He needs Clint to retrieve his now thirteen-year-old son from his Mexican mother’s clutches. The boy has become a pawn in a power struggle between the divorced couple over control of financial assets.

It immediately gets confusing, because the film is set in 1979, then fast forwards only one year. Is Clint supposed to be his younger self? He sure doesn’t look it. There are lots of stunt doubles employed in the making of this film. Clint on horseback is approximated at one point by a ground level camera, looking longingly at his shoulder-up profile against the background of a clear blue western sky, bouncing up and down. If I were to guess, they shot this outside a Walmart on a coin-operated pony ride. What? Another quarter? Come on Clint, sit up straight in the saddle!

The son, Rafo, played by Eduardo Minett, whose only other acting credits are from two Mexican TV series, tries hard but fails to deliver, carrying around a pet rooster named Macho throughout the film. The cock-fighting little beast eventually becomes Clint’s pet after the bird attacks and disables an incompetent thug who’s been pursuing the boy and old man as they attempt to reach the US border. That’s right, a rooster defeats the bad guys, not Clint. At first glance, Minett appears to be attempting a Spanish accent with lines like, “I hate jooo,” but he seems to be the real deal based on his acting career.

Dwight Yoakum, plays Rafo’s estranged father, long divorced from the boy’s lush of a mother, Leta, played by forty-year-old Chilean actress Fernanda Urrejola, the female equivalent of the cliché Mexican drug cartel kingpin character from The Mule. Yoakum wears a ten-gallon hat to cover up his weird, long gray hair, and a bulging duster to cover up his bulky body. Yoakum has quite a musical career, and numerous film credits, but he’s lost his luster. Maybe he and Clint are buddies. Or maybe Yoakum’s appearance here provides additional support for the movie’s theme of what it means to be an aging man.

Clint appears to have a thing for Mexican women. He visited Latina prostitutes while south of the border in his last film. This time, the ancient Gringo clearly “still has it,” at least in this script, attracting the attention of Marta, played by Natalia Travern, whose age is guessed to be mid-forties. She is famously protective of that information. But the 45-50-year age gap between Eastwood and his leading ladies is both expected and comical. In a final scene, he and Marta dance closely in her darkening roadside diner, and it looks like she’s holding his skeleton upright. As is usually the case, Clint “gets the girl,” though in reality, he’s now getting the grandmas. At least he keeps his shirt on in this film. 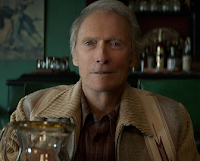 As we walked out of the theater, having taken two brief naps, I felt both refreshed and strangely like I had inhabited the mind of a 91-year-old. The plodding pace of the film was a long, slow ride into the sunset by one of the icons of yesteryear. Eastwood never had a lot of range as an actor, he was just reliably Clint for decades. We don’t always get to witness our favorite stars in their later years, they just fade away. To be productive and engaged in a career that he loved up until the bitter end is both a tribute to himself and a gift to his fans. This is where you go to see what your future holds.