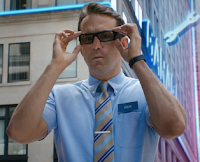 It was a long week that needed to end with some light entertainment. We watched in Florida and discovered our daughter and son-in-law were watching at the same time over a thousand miles away, despite the time zone difference. We all agreed that Free Guy was surprisingly better than expected.

Ryan Reynolds plays Guy, who comes to be known as blue shirt guy, a bank teller living in a video game with his pet goldfish. The action toggles between real world players and the avatars they choose to represent them in a complex virtual setting. There’s lots of nerd humor when unexpected interruptions in actual reality distract from the game play.

Throughout the film I was drawing parallels with The Truman Show. Ryan Reynolds’ childlike sense of wonder and acceptance of his Groundhog Day existence in a video game is in fact a role into which Jim Carrey could easily have been substituted. But Reynolds has built a reputation for rapid fire comedic punchlines in the Deadpool franchise, and the cleaned-up version in this movie works equally well. I couldn't help but imagine the song Stayin' Alive being played while Guy strolls down a street filled with explosions and general chaos.

The graphics in Free Guy are astounding, nonstop, and exquisitely familiar to gamers, with lots of small effects and references they’ll appreciate. For the uneducated, at least look up the video game version of “tea bagging” in the Urban Dictionary for a good laugh. Also understand that NPC is an acronym for Non-Player Character. A series of nods to Marvel and Star Wars, and help from a few of Reynolds’s acting friends is no accident. Production company 20th Century Studios is a subsidiary of The Walt Disney Company. There’s even a nice cameo by a favorite celeb who passed away after filming.

There are far too many ways to spoil the fun, so I’ll just say that the action is continuous and beautifully staged, Reynolds and Co-star Jody Comer (Killing Eve’s Villanelle) work well together, and ultimately this is a love story, a buddy story and a message movie. You really can do anything you want, even if you don’t wear sunglasses. Guy’s best friend, Buddy, is played by Lil Rel Howery. You’ll recognize him from Get Out in a similarly loyal, supporting and amusing role.

So, substitute Free City for Oasis, Antwan for Christof, toss in some music by Mariah Carey, mix them all together and ask if you’re “Ready, player one?,” and get ready to enjoy the ride.