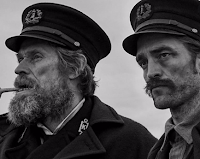 Our second film while sheltering in place cost $4.99 on Amazon Prime. This one made it into a list in our local paper of movies recommended while in isolation. What the article didn’t say is that, if you’re feeling down and despairing over your current plight, there’s nowhere to go but up after you see how much worse it could be, as depicted in The Lighthouse.
Filmed in black and white and set in the late 1800s somewhere in New England, this is a tour de force for both Robert Pattinson and Willem Dafoe. The choice of monochrome perfectly draws the viewer into the bleak and lifeless rocky setting, more often than not awash with either crashing waves or relentless rain. But the stormy human relations within the lighthouse chip away more consistently at the sanity of the two men and the viewer's tolerance.
Dafoe plays Thomas Wake, a crusty old salt so stereotypically embodying the image of New England fishermen he might have walked off the label of a Gorton’s Seafood label. He is the lighthouse master who arrives with young assistant Thomas Howard, played by Pattinson. The two have enlisted for a four-week stint in the dreary quarters at the base of the illuminated tower. This is all pre-electric, so the only energy on the rocky outcropping is that produced by a coal-fired motor that turns the overhead beacon. Drinking water is obtained from a cistern so befouled as to prevent decontamination of its contents. As a result, and due to boredom, alcohol becomes a favored beverage. As the supply of liquor runs out, it appears the men turn to a mixture of lamp fuel and honey, which erodes their remaining sanity.
Wake is a superstitious, abusive taskmaster. His heavy brogue (hard to understand at times) is almost pirate-like during frequent rambling soliloquies, poetic toasts and questionable tales of his seafaring past. Howard labors over repairs and maintenance of the weathered structure under threats of withheld wages if not performed to Wake’s increasingly demanding specifications. The truth of Howard’s own past is eventually revealed and weaponized by Wake in ensuing arguments that blow up into a full-fledged feud. When a NorEaster cancels arrival of a relief crew and supplies, things come completely unglued.
Throughout their month together, the seamen seek alone time for moments of sexual release. Howard seems obsessed with fantasies of mermaids, and there’s no telling what fuels Wakes daydreams. Eventually, the wall between the men softens somewhat, alcohol intervenes, close dancing ensues and the audience begins to wonder if the movie might be more appropriately titled Brokeback Lighthouse, or does it really take a houseful of semen to run a giant light bulb?
Robert Pattinson has come a long way since his youthful Twilight days. And Willem Dafoe, always intense and frequently sinister in his extremely busy career, never disappoints. Cinematography within the confines of this small set and in mostly harsh outdoor conditions is impressive, but lighting is so dark you want to turn up the brightness on your TV. Director Robert Eggers only other feature film is 2015’s The Witch, a low budget horror film set in 1630s New England. This film might earn him some recognition as a director, though not due to box office receipts. Released in October of 2019, the current pandemic is not to blame for its failure in the theaters.