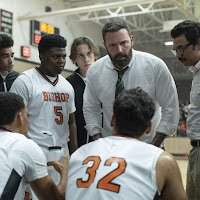 So where have we seen this movie before? Oh yeah, in 1986 a little film called Hoosiers chronicled the true story of a team coached by a man with a checkered past, assisted by a town drunk who loves basketball. Combine both of those characters into Jack Cunningham, played by Ben Affleck, and the result could be The Way Back.
The number of similarities between the two films is noteworthy: a player who is ejected from the team for bad behavior but is later allowed to return, a team with only five players, one of whom is small in stature, a coach with anger issues who is ejected from a critical game, the need to keep alcoholic adults away from the players, and an unlikely come-from-behind championship win.
This movie is actually two films in one. The first is the above mentioned basketball story, an exciting sports movie that has you cheering for the awakening underdogs. The second is the overarching personal drama of Jack Cunningham, the best player from the best team ever to play at Bishop Hayes high school in California. Jack’s alcoholism is made abundantly clear in the opening scenes of the film. He drinks about a case and a half of beer while wrestling with his response to the request by Father Edward (John Aylward) to lead the school’s foundering team following the sudden heart attack suffered by the current coach.
Jack is a construction worker, separated from his wife for a year, daily drinking himself unconscious at a local bar where a friend of his father’s dutifully helps him home. Jack’s relationship with his father is one of the demons that has him medicating himself. But there are others, as we discover later in the film.
Ben Affleck is no stranger to drink. His own three tours through rehab and a divorce from actress Jennifer Garner provide more than adequate resources to draw upon for the role of Jack. Affleck’s acting here is powerful, convincing and heart wrenching. Jack is struggling with demons far greater than alcoholism and others revealed early in the film. And as is the case with many who suffer from the disease, Jack has to bottom out before he’ll get help. But just when you think he’s reached his low point, he’s taken down another level, and then another.
In yet another plot line, a dedicated but withdrawn player named Brandon reminds Jack of his younger self. They are both the best player on their respective teams, and they both suffer from low self-esteem fueled by their fathers.
There’s lot’s of profanity in The Way Back, to the chagrin of the team chaplain, played by Jeremy Radin. Try as he might, Father Mark can’t get Jack to stop swearing in front of the boys. And the boys seem to respect and respond to Jack’s verbal assaults.
Throughout the story, Jack’s family and friends “check up on him” in a sort of piecemeal intervention that fails to shake him out of his depressed and deeply angry state. It becomes clear that alcohol did not break up his marriage. The breakup was collateral damage to something far worse.
As exciting as the sports story in The Way Back eventually becomes, this is not a cheery movie. There’s no need to rush out and see it, but it’s definitely worth the price of admission.