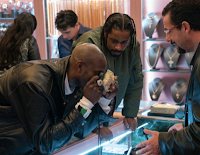 Sometimes I have to take a step back and differentiate between the quality and effectiveness of a film versus my enjoyment at its showing.
If you enjoy being jostled in a noisy crowd at a filthy amusement park, and being thrilled at riding a rickety roller coaster with a history of safety issues and sharing your car with drunken thugs, then Uncut Gems may be your ticket. It is well done, but hard to watch.
Adam Sandler, the star of this show, is at his Jewish best, but not the lighthearted Saturday Night Live version, singing The Chanukah Song. This is a portrayal of a gambling-addicted New York Diamond District purveyor of gems and collector of sports memorabilia working to stay ahead of his own tidal wave of self-destruction. The addict’s delusion – just one more big score – propels him through layer upon layer of a money-fueled onion of Ponzi schemes built around the hope of auctioning an uncut 3000 carat stone for over a million dollars.
Sandler, playing Howard Ratner, relies for sales leads on associates of real-life basketball legend Kevin Garnett, a six foot eleven power forward, now retired, who is still dominating the game for the Boston Celtics in Uncut Gems. Garnett, smitten with the potentially magical powers of a huge black opal mined at the expense of Ethiopian slave-workers, offers his NBA title ring as collateral for the stone, which he believes will enhance his game. And it does. But not before Howard pawns the ring for cash, makes a series of seemingly impossible bets, and wins big. Or does he?
That’s where a family member mafia type, on a break from their shared Passover meal, sends thugs to collect from Howard, and cancels the bet. Of course, the bet would have paid off, so Howard learns nothing. On to the next big thing.
Along Howard’s journey, he is left naked in the trunk of a car, thrown in a fountain, beaten several times and threatened mercilessly. Nothing stops him or even slows him down much. His gambling adrenaline has the same effect as any other stimulant.
Howard treats customers, children, his wife and family with the same glazed-eyed, addle brained juggling and leveraging of emotions and money, robbing from Peter to pay Saul, in an exhausting array of interdependent maneuvers that result in his ultimate reckoning. But not before one more attempt, successful yet again, with the aid of his devoted prostitute girlfriend, Julia, played by Julia Fox.
The real feel of this film was enhanced by performers playing themselves alongside Garnett, like rapper Ca$h Out and The Weekend.
Idina Menzel steps away from her voicing of Elsa in Disney’s Frozen, appearing here as Dinah Ratner, Howard’s wife, disgusted with his antics and agreeing to announce a divorce, “after Passover.” Judd Hirsch is along for the ride as “Gooey,” 84 years old, but still reminding us of the TV hit Taxi.
Directed by 35 year old brothers, Josh and Bennie Safdie, whose limited experience includes the money-losing 2017 film Good Time, this latest effort will establish them as players in Hollywood. The discomfort I felt throughout the movie can be attributed to the relentless pace of Sandler’s delivery from a script so loaded with F-bombs and shouting it can cause tightness in your chest if it doesn’t numb your senses.
Uncut Gems (2019) runs 2 hours 15 minutes and is rated R.
Should I see this movie?