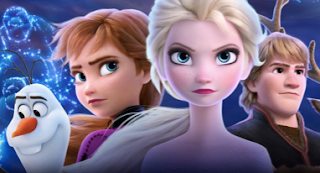 It has been six years since the Hans Christian Andersen tale, The Snow Queen, was released as Frozen, the highest grossing animated film of all time. The subsequent merchandising juggernaut made a sequel pretty much inevitable. Frozen II will undoubtedly do very well, drawing on fans of the first film during a choice Christmas release. But perhaps Disney animators could have better spent their time working on something new.
This latest entry into the Disney library simply tries too hard to be wonderful. Where the original film was, well, original, this is a rehash with a convoluted script, unnecessary characters and songs that just can’t compete with the award winner belted out by Elsa (Idina Menzel) several years ago.
We have come to expect visually stunning 3D animation from Disney. But the giant blue eyes and tiny turned up noses of the Arendelle-dwelling royal sisters, voiced once again by Kristin Bell and Idina Menzel (Anna and Elsa respectively) seem plastic and two dimensional on this outing. And several scenes appear to tap into Fantasia for color and kaleidoscopic inspiration. In other words, gratuitous bursts of colors, sparkling palettes, textures and patterns.
And then there’s the deliberately adorable fire salamander named Bruni. This creation was probably in production as a plush toy before the ink dried on the storyboards. The character adds nothing to the story and actually makes the film longer than it needs to be. Frozen II is one minute longer than Frozen. They could have shortened the sequel considerably without impacting the somewhat pointless story.
Another creature that was undoubtedly fun for the animators was the Earth Giant. These living rock beasts recall the efforts of much earlier animators to bring to life L. Frank Baum’s Nome King using Claymation in Disney’s 1985 Return to Oz. Large, lumbering and relentlessly frightening, these creatures become integral to the plot once it is revealed that a dam constructed by Anna and Elsa’s grandfather was a trick played on the neighboring nature-loving Northuldra tribe. This is the truth that Elsa has sought, responding to a siren-like melodious call only she can hear. It leads her into the enchanted forest described in a bedtime story told by her late father.
Olaf the snowman, cute and sparingly comedic in the first film is given a large part in Frozen II. This is sure to sell more Olaf plush toys for years to come. If you think you can’t get enough of Olaf, see this film and you’ll agree that you can.
I would have to re-watch Frozen to determine if it contained nearly as many songs as version II. It’s hard to tell which song is expected to be the big hit, but none of them stand up to Let it Go from the original. Kristoff’s turn at the mic is over-produced, with a chorus of harmonizing reindeer backing him up.
The elements water, earth, fire and air are spectacularly illustrated throughout the film. And of course, ice and snow are abundant and constantly being tossed about by Elsa. Not to be accused of creating an entirely white cast of animated characters, Lieutenant Mattias is voiced by Sterling K. Brown, and the Northuldra people are vaguely indigenous.
Kids anxious to see Frozen II will want to see this in the theater. Otherwise, I see no need to rush out. This may quickly become bait to draw new subscribers to the Disney Plus streaming service.
Frozen II (2019) runs 1 hour, 43 minutes and is rated PG.
Should I see this movie?