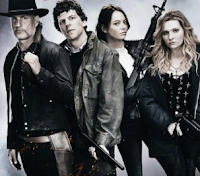 It is strongly recommended that you see 2009’s Zombieland prior to seeing this sequel.
Done?
Ok, now on to the fun and games.
Trailers facetiously promote the cast via their respective academy award statuses: Woody Harrelson, nominee (The People vs Larry Flint and The Messenger); Jesse Eisenberg, nominee (The Social Network); Emma Stone, winner (La La Land); and Abigail Breslin, nominee (Little Miss Sunshine.) This film is decidedly not a medium for culturing awards. But as a fun exercise in the genre-bending comedy/horror category, it must have been a fun assignment for all involved.
The four stars of 2009’s Zombieland return here to reprise their roles as Tallahassee, Columbus, Wichita and Little Rock (Harrelson, Eisenberg, Stone and Breslin respectively), on their continuing mission to survive a viral pandemic that reduced the world to a post-apocalyptic wasteland populated by hordes of brain-eating living dead. As we have now come to know with the help of TV series like The Walking Dead, The Santa Clarita Diet and many others, the only thing that “kills” a zombie is a grotesque head trauma that destroys their already dead brain. This has been an absolutely boon for video editors and makeup artists in Hollywood. Comically horrific visual and audio special effects abound in these films.
The basic formula established in 2009 has not changed. Wandering apocalypse survivors team up in a quest to find a safe place to call “home” against all odds in a world where there are very few safe places. The White House becomes the setting for some initial survivor hijinks, desecrating objects and settings no longer sacred in the decimated United States.
New friends team up with the gang, but like the red-shirted disposables in Star Trek, are quickly infected and dispatched, usually following a stomach-turning zombie battle. The zombies have been categorized and named since the last film, and Columbus’s obsession with rules leads to some intrusive 3D titles that crumble and fall to the ground after their purpose has been served. A vehicle even crashes into a low-hanging title at one point. A quest for the “kill of the year” honor results in a couple of scenes completely outside of the main story, but are opportunities for additional laughs.
There are references to some events from 2009 that uninformed viewers will find puzzling, but otherwise do not derail the script. This is all about characters bantering in the most unlikely situations, inventing rules for a world where no rules apply. But even in the apocalypse, it pays to “beware of bathrooms” doesn’t it?
Woody Harrelson is at his goofy “Cheers” best here. He has proved his mettle as an actor over the years and is entitled to have some mindless fun, as are we. Ditto for Emma Stone. Directing and writing credits remain intact ten years later, and although not as new, or even as fun and imaginative as the original, fans who have been awaiting a sequel will thoroughly enjoy this 99 minutes of brainless (pun intended) fun. If you’re squeamish, just forget it.
Note: stay past the initial credits. Some of the greatest fun in Zombieland: Double Tap comes in a lengthy revisiting of the 2009 chapter of this once-a-decade franchise.