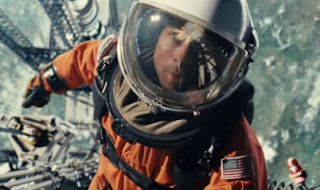 A personal disclaimer: I liked Star Trek The Motion Picture, Dune, 2001: A Space Odyssey and Alien. I did not like Star Wars the first time I saw it, mostly because I expected something more cerebral. The bar scene full of goofy aliens, which most people LOVE, seemed silly to me.
I was looking forward to Ad Astra, based solely on the trailers we’ve seen for a couple of months. It looked thoughtful, exciting and spectacularly imagined. And in fact, it was very thoughtful and visually stunning. So why did I come away somewhat disappointed?
The film is set “in the near future” according to opening titles. How near is subject to speculation, since a vast metropolis exists on the Moon, commercial space transportation has become routine, and a subterranean government base is established on Mars. Visitors on the Moon move via escalators past a DHL shipping outlet and Subway sandwich store. It looks much like a large airport does today. This is the stuff of 100 to 300 years from now.
Unfortunately, as mankind has moved off-Earth, all human failings have hitched a ride. The Moon is at war, complete with raiding bands of pirates, and the furthest outpost in the solar system near Neptune has become the scene of a lunatic’s mass murder. That lunatic is the preeminent U.S. astronaut, H. Clifford McBride, played by Tommy Lee Jones. He is the father of Ad Astra’s primary character, his son Roy, played by Brad Pitt.
And where have we been introduced to this? Ah, yes, over fifty years ago when Stanley Kubrick had flight attendants working in weightless conditions on board a moon shuttle. There hasn’t been a ton of imaginative progress since that visionary masterpiece. But on this trip, Brad Pitt is charged $125 for a blanket and pillow pack. And it all feels very real if ubiquitous corridors and airlocks still satisfy the requirements of construction on other worlds.
It seems that Pitt’s real life quest to tear down the emotional walls that keep him safe from vulnerability are similar to those that make Roy McBride a supremely stable space ranger. His pulse fails to exceed 80 beats per minute even when falling to his death from a towering space antenna, parachuting to a landing at the last moment. Throughout the film he is subjected to frequent psychological assessments during which he professes to be “feeling good and ready to do my job to the best of my abilities.”
Several long sequences in Ad Astra had the feel of Kubrick’s long journey to Jupiter, minus the psychedelic colors. There’s not a lot of dialogue, and the feeling of isolation within confined spacecraft and space suits runs pretty much throughout the film.
A running gun battle in rovers on the surface of the Moon, an attack by released research baboons on a scientific vessel, and a hand-to-hand combat sequence aboard the ship bound for Neptune are inserted to add periodic excitement to the otherwise monotonous plot. We’re never really sure why Tommy Lee Jones is using antimatter to generate “surges” that threaten to wipe out all life in the known universe. He just wants to identify intelligent life somewhere, anywhere. The government’s goal is to destroy him at all costs. The 1956 film Forbidden Planet made better use of the human psyche – The Tempest style – to parlay human frailty into cosmically sinister forces. The senior McBride just seems to have gone space-mad from self imposed loneliness and ambition.
Ad Astra, Latin for “to the stars” might have been more aptly titled Ad Nauseum, given the droning self-talk of the main character and the anti-climactic ending. Sure, young McBride saves the universe, but along the way he discovers that his father never cared about him (he tells him this) and the government is secretive, duplicitous and has used him as an unwitting tool.
If you like science fiction, this is probably worth seeing. I’d be surprised if it does well in theaters once people start talking about it. The pace is similar to 2016’s Arrival. Don’t go into it expecting the excitement of 2013’s Gravity 2015's The Martian or even the original Planet of the Apes.
At the end of the day, no intelligent life was found. But maybe the negative tone of this review is just the result of my wife calling Brad Pitt “dreamy” while I was sitting next to her sharing a bag of M&Ms.
Ad Astra runs 2 hours 3 minutes and is rated PG-13.