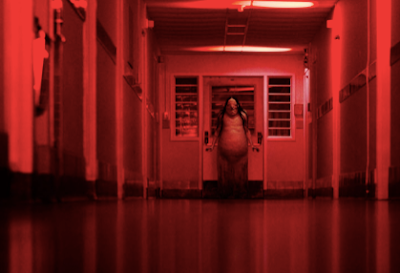 Back in 2006 I had the privilege of meeting Guillermo del Toro at the Chicago premier of Pan’s Labyrinth, one of the creepiest movies I’ve ever seen. Del Toro has a uniquely deranged creative style that is completely out of sync with the Guillermo I met – a Teddy Bear of a man, soft spoken and generous with his time when speaking with fans. He talked about his childhood, growing up in Catholic schools and the influence his education by Nuns had on his monstrous, otherworldly niche, a genre that no one else really shares. He even autographed not one, but three small promotional mini-posters for me and my kids, taking the time to draw a cute little caricature of himself on the back of each one.
So it was easy for me to identify the monsters he oversaw as screenwriter for Scary Stories to Tell in the Dark, with the Directorial help of Andre Ovredal. They are the stuff of nightmares. Really twisted nightmares. And now that Del Toro has Best Director and Picture Oscars to his credit for The Shape of Water, it seems noble of him to allow a relatively obscure Director to dwell in the chair he has occupied from Hellboy to Pacific Rim and beyond.
This film initially caused me to feel as if Del Toro was taking a step back from the intensity of his previous films. Maybe relaxing his horror muscle a bit. It had a feel at the beginning of the movie similar to just about every other Halloween themed movie I’ve seen, including Halloween itself. There was also a slight Stranger Things camaraderie among the film’s handful of youthful costars, up to some mischief on Halloween night in 1968. All of this is set against the televised run-up to the Nixon Presidential victory several weeks later. If there’s a deeper meaning here, it’s lost on me. I mean, Nixon was creepy and monstrous, but no match for Alvin Schwartz’s very dark young adult books, the basis of this movie. And why is this movie being released in August instead of October?
We find ourselves listening to one of those kids, Stella Nichols, reluctant to go out with friends (Auggie and Chuck) and preferring to just stay home and practice her own scary story writing, narrating the beginning and end of the film by commenting that, “If you tell a story often enough, it becomes real.” A visit to a haunted house in fictional Mill Valley, PA offers little to stir the imagination. It looks like every other haunted house from Hill House to Casper, and maybe even The Adams Family. The sets are the extremely dark blue of filtered fake night in films and full of plastic-y cobwebs that would be enough to keep me out.
The house has a history. Young Sarah Bellows, albino daughter of the wealthy and sadistic Bellows family, has been locked away in a secret room her entire life. The family moved on without her, leaving her locked in a basement prison to die and for our heroes to discover, along with a magic book that writes itself…in blood – scary tales!
The book is what binds together the handful of stories acted out along the way. The first, a scarecrow in a cornfield episode takes The Wizard of Oz down a rabbit hole of death at the hands of a Del Toro scarecrow creation that clearly lacks more than brains. Follow the Yellow Brick Road – if you dare. Pitchforks are not optional.
This is where Del Toro’s vision starts to thicken the toe soup, or should I say stew. I don’t want to give away too much. The stories each have their own creep factor, and several good jump-out-of-your-seat moments to boot. A key Mexican character named Ramon may have something to do with the current immigration climate, or the fact that Del Toro is Mexican himself. But this kid’s brother came home from Vietnam in pieces. At this point it would have been a hoot if the multi-pieced monster unleashed against him queued Patsy Cline’s “I Fall to Pieces.” But it probably wasn’t the best time for a laugh. The town sheriff, played by Gil Bellows (Patriot, Shawshank Redemption) is clearly a racist, and local thugs whose leader Tommy Milner was earlier dispatched by the scarecrow, scrawled “Wet Back” on the hood and trunk of Ramon’s car. The more things change, the more they stay the same.
The sets throughout the film were nicely adorned with 1968 memorabilia, but not in a subtle way. Set decoration is an art in itself, one that requires more than Google familiarity with a given period. But the choice of Bye Bye Birdie as the school play at which Chuck’s sister Ruth’s face explodes with swarming spiders (yeah, I hate spiders too) was almost cliché. That is, until you combine it with the discovery that Ramon was not “following the harvest” but rather a draft dodger. The draft weighs heavily on the fate of Conrad Birdie in the 1963 musical comedy too. So what’s up with that?
The anthology approach to compiling a larger story is distracting and predictable. Each time a chapter ends, we know we’re headed back to the book to watch another story get written in blood before our eyes. And it becomes fairly obvious that Stella will need to get her groove back and write the darned ending…in blood.
But overall, as the story begins to gel and the viewer accepts the fact that they’re watching a multi-act play, you can push back into your seat, like a rollercoaster where you know there’s a big drop coming, and you don’t want it to happen. Oh yes you do!