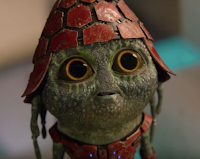 So, what’s different about Men In Black International from its predecessors and why doesn’t it work? A number of things, actually. The MIB franchise, parts I, II and III were all directed by Barry Sonnenfeld. They all starred Will Smith and Tommy Lee Jones. And rather than produce Men In Black IV, faced with declining box office revenue, even when adjusted for increasing ticket prices, they chose to stop while they were ahead. So is this a reboot or simply a fourth chapter?
Calling this film Men In Black IV would have been a disservice to the original triad, which struggled even with the on screen charisma of Smith and Jones to maintain audience interest and compelling stories. Granted, Liam Neeson has a very particular set of skills, as we now understand, but as the head of the London MIB organization, “Agent High T” lacks resolve and caves under pressure from his subordinates. And there’s a reason for that, as we discover later.
There’s some cool tech in this outing. Weapons that are magically extracted from the trim of a flying BMW and a proprietary super-fast subway system transports agents under the ocean to London by way of the Thames (which would actually be the long way around) in…well, they don’t actually say how long, but it’s fast. There are lots of floating displays and holographic projections that have become so ubiquitous in science fiction films that it seems like we should be using them in the real world by now. And of course, the infamous “neuralizer” is used frequently to cover tracks with induced memory lapses and planted suggestions throughout the movie.
Chris Hemsworth, looking lean and unlike Thor in a suit and tie, plays Agent H, reluctantly alongside partner Agent M (Tessa Thompson), a newbie who talked her way into the MIB organization after succeeding in a lifelong quest to find their headquarters. Oh, and she’s a girl! So, we have a couple of obligatory nods to feminine power that come off as patronizing. “I had that conversation,” quips Chief Agent O, the steely Emma Thomson, about the team’s “Men” moniker. And Agent H credits his partner by stating, “We’re the Men…and woman…In Black.” Wink, wink, meet you for a drink later babe. “Who is that guy?” M asks a colorful female, time-shifting alien. “I don’t know but he’s yummy!”
He may be yummy, but he’s no Thor. He’s kind of lost his mojo on the team, but in a fun nod to the Thor character, and as an Easter egg for Marvel fans, he desperately reaches for a one pound sledgehammer during a fight, skidding along the floor as if it might jump into his grasp, but alas, has to pick it up like a mere mortal and toss it ineffectively at a battling alien.
The star of this film is a non-human animated chess piece named “Pawny.” He’s got Baby Groot cuteness and most of the funny lines in the film. I’d pay to see a Baby Masters of the Universe starring these two animated characters. And ultimately Pawny literally saves the world, which goes pretty much unnoticed by the insecure human agents. He is voiced by Kumail Nanjiani, with a subtle Indian accent that makes him sound vaguely like a young computer help desk specialist or Uber driver (which he actually plays in the upcoming Stuber.)
The film seems to lose its footing, heading off on a tangent to an evil ex girlfriend of Agent H named Riza (Rebecca Ferguson.) The most interesting thing about her is a third arm, which she uses to great effect in a fight scene with Agent M. But she really doesn’t seem all that evil, and is defeated far too easily.
Aliens abound in Men In Black International. This has always been a hallmark of the franchise. But minus Tommy Lee Jones’ deadpan demeanor and Will Smith’s naïve enthusiasm, the chemistry of the first three films was entirely lacking. F. Gary Gray, a director with a meager film repertoire and mostly music videos in his portfolio, is a puzzling choice to take the lead on this film. Box office take during its first weekend was respectable but not impressive. It remains to be seen how long it stays in theaters.
Kids might like this, but after spending $20 on tickets and an equivalent amount on snacks, I would have appreciated being shot with a neuralizer on the way out of the theater.