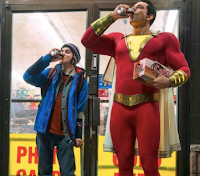 We enter the latest DC Comics origin story with young Thaddeus Sivana in the back seat of a car, speeding through a dark and stormy night in the year 1974. His abusive older brother and father are in the front seat, proving how abusive they can be, when Thad’s Magic 8-Ball (remember those?) starts flashing mysterious symbols and messages, ultimately causing Thad to experience a hallucination. Emerging from a mental trip to a wizard’s lair, he freaks out, startling his father, who freaks out even more and crashes the car. Thrown from the car and face down in a pool of blood, is the elder Sivana dead?  Signs point to yes.
Flash forward to adult Dr. Thaddeus Sivana (Mark Strong), who has spent his entire life searching for instances of similar, let’s call them abductions, and occurrences of the seven mysterious symbols throughout the world. We quickly come to understand that he has become evil. Much like wealthy Bruce Wayne, he runs a shadow organization that covers for his secret identity.
There are two responses to abuse. One is to pay it forward, becoming an abuser oneself. The other is to learn from the experience and make sure no one ever suffers the same treatment, at least at one’s own hands. Would Dr. Sivana have become evil if he embodied kindness? Don’t count on it.
Meanwhile, Billy Batson (Asher Angel) is on a quest to find the mother who lost him in a crowd at an amusement park when he was a toddler. He has bounced around the foster system, too much to handle for all placements to date. He winds up at a group home that is incredibly diverse and loving, and also the home to Freddy Freeman (Jack Dylan Grazer), the lightly handicapped superhero fan who has some of the best lines in the film. Upon first meeting Billy he warns, “Don’t believe everything you hear, it gets really Game of Thrones around here.” He then admits he’s messing with Billy and then brags, “I’m a handicapped foster kid – I have everything in the world going for me!”
A lunchtime conversation focuses on Freddie’s obsession with all things superhero. He asks Billy which superpower he’d prefer – flying or invisibility, and then proceeds to dismantle the traditional answers and shine the light of truth on them. He shows Billy his guaranteed authentic bullet that bounced off of Superman, a prelude to a later scene, and our first hint that we are in the DC Universe, where superheroes are real. Ultimately Freddie becomes Billy’s advocate and sidekick following Billy’s transformation.
What transformation, you ask? Well, concentrate and ask again. Billy experiences a similar visit to the Wizard’s lair, this time by subway train, flashing symbols similar to the 8-Ball earlier in the film. This is where Billy, a young Scott Baio lookalike, first demonstrates his sense of humor and extreme confidence. The Wizard is so overly dramatic, with his loud commands and hyperbolic pronouncements, Billy chuckles and says, “Seriously?” It’s an endearing moment that ends when the wizard scares him into taking the whole wizard thing seriously. By grasping the Wizard’s staff (yeah, weird) and saying “Shazam!” he instantly becomes a huge, muscle-bound superhero version of himself at about age 30-something (Zachary Levi, from the series Chuck.)
The Wizard’s lair is also home to seven demon statues, representing the seven deadly sins, frozen solid and under the wizard’s control, until…
…Dr. Sivana enters, snags a glowing orb that enters his bald skull as a glowing blue eye, and empowers him with the spirits of the statues. Of course, they come to life and do his bidding, all with the greatly overused particle smoke effect that video effects designers have mastered in the past year or so. Yay computing power!
There’s a lot of fun along the way as Freddie and Billy/Shazam set out to discover what powers Billy has become endowed with. This is honestly the best part of the movie, reminiscent of Tom Hanks, in Big, trying out his new body with the silly humor and innocence of a fourteen year old.
Meanwhile, old blue eye, who come to think of it rather resembles a glowing Magic 8-Ball, sets out upon a new quest – to capture Shazam and absorb his power into his own. And that quest takes up the remainder of the movie, which at over two hours seems much too long.
Will there be a sequel to Shazam? Signs point to yes. Drawing on the success of Aquaman and Wonder Woman, DC is on a roll, albeit pale by comparison to Marvel. Mixed results from their portfolio that includes Man of Steel, Batman v Superman, Justice League and Suicide Squad, and with a timeline of sequels planned, the DC Extended Universe has become the 8thhighest grossing franchise to date. Still, can Shazam ever be taken seriously now that the fun is gone? Cannot predict now.
A note to parents: some scenes featuring the animated statues are intense. Being eaten or thrown out a skyscraper window is definitely not for the kiddies.
Shazam! (2019) runs 2 hours,12 minutes and is rated PG-13